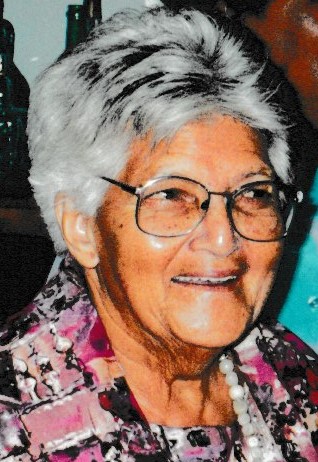 Alice Maude Rutherford Titus (nee Buchner) was born on 12 December 1920 and died on 8 June 2005 as the eldest child of Andrew and Violet Buchner.  Their surname was pronounced bikhәnaar (phonetic) or “biegenaar” (Afrikaans) by most Swellendammers.  Her father was a teacher at St Luke’s Anglican School in Somerset Street and her mother did domestic work.  Alice had a sister and three brothers. The family home was in Lemmetjiesdorp on a large tract of land which they owned and had to leave, like many others in town,  because of the Group Areas Act.

They had to cross a stream to get to the rest of the town.  It was normally easy to do so, except when it rained heavily as it did when Aunt Violet drowned  on her way home from work.  Her body was found downstream the next morning where  it was guarded by her faithful dog.  This event left a deep scar on the family.

Alice attended Zonnebloem College in District Six, Cape Town from Grade A until she obtained her Lower Primary Teachers’ Certificate.  She married William (Gawie) Titus who was the principal of Sandhills Primary School for 36 years.  At that time wives were not allowed to teach at the school where their husband was the principal.

Consequently, she taught in De Doorns, which meant that she had to get a stop order at 05:30 every day in order to get a seat on the regular goods train at 06:00.  Thereafter, she had to walk very far to her school.  When she accepted a post in Hex River, she had to follow a similar procedure and walk 3 kilometres to school, rain or sunshine.

When they bought a car, circumstances improved.  Furthermore, the regulations were changed, and she could teach at Sandhills Primary with her husband.  Unfortunately, tragedy struck because William gradually lost most of his sight and eventually only had limited reading proficiency.  The community, including the farmers in the valley, had considerable regard for the high standard of teaching he maintained and the nurturing environment he created in their farm school.  Therefore, the education authorities were strongly advised to retain William in his post as principal, despite his visual impairment.  Consequently, Alice continued to perform her duties diligently and accepted the additional load of her husband’s administrative duties.

The couple had two children who established themselves firmly in their chosen careers: Erna Prins in community and school nursing and Tobie Titus in education and rugby administration (President of Western Province Rugby Union; Board member of SARU).

The fact that Alice could not get a teaching post for three years, did not deter her.  During that time, she worked in the farmer’s shop and in season, for eight weeks as a supervisor in a packing-store.  This lady consistently proved that she was prepared to do anything to feed her family and contribute to the welfare of her community.

She was in charge of the church choir on the farm, she and her husband were the Sunday school teachers and regularly did home visits to the members of their congregation.  Furthermore, she played netball and coached the team.

She did not neglect a single one of her responsibilities.  She performed all the required roles meticulously because she had such a deep love for her family and her profession.  In addition, she spent leisure time with her husband and children.  They visited different  parts of Southern Africa like, Mozambique, Lesotho, Swaziland, Botswana, and most of the provinces of South Africa (including popular tourist destinations like the Kruger National Park, Port Elizabeth and Durban) during the winter holidays.  In view of her husband’s poor eyesight, she had to do most of the driving until her children were able to take over that role.  During the summer holidays they went camping at Diaz Beach in Mossel Bay.  Alice regarded it her duty to tow their caravan to and from the camping site.  Rumour has it that she was not the most careful driver because she was always in a hurry.  Nevertheless, she never caused a serious accident.

When the family moved to Worcester, she involved herself in new projects.  Apart from continuing to be active in the women’s society of her church, she played a prominent role in the home-craft society that coached women in the management of their households.  In addition, she was instrumental in the founding of Awendrus old-age home, an institution she helped to manage and later joined as an inmate when she became frail.  After the death of her husband, she for the first time afforded herself the opportunity to join a group tour to various European countries.  In 1995 the Swellendam community fittingly recognised her unselfish contribution to society with an honorary award.

Alice Titus was an educator of note, who gave her very best to her learners and communities, in partnership with her husband.  She was also a loyal member of her teachers’ union, CTPA, until her death.  She was a supportive wife to Gawie and nurtured her children educationally and spiritually.  It is a mystery how she managed to be successful, despite the many challenges she faced.  One reason could be her inexhaustible energy, coupled with her will to serve her Creator in the best possible way.  She is another excellent role model for young Swellendammers.