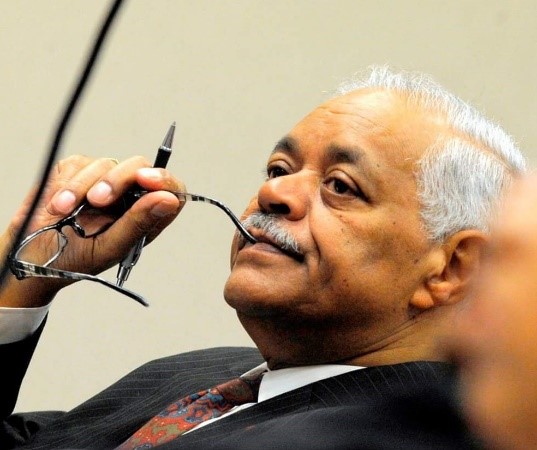 JIMMY ELLIS: AN ICON AND ROLE-MODEL2 March 1946 – 23 November 2017James Ellis (known as Jimmy) was the eldest of six sons of James (Jimmy) and Alice Ellis. His father was a cobbler and the family was not rich, but the parents made sure that their children got the best possible education.Consequently, one of them obtained a first degree and three, more than one academic degree and became educators.

Jimmy entered school at the age of four years. Due to ill-health he was often absent from school and was forced to repeat the first year. The way it was explained in those days, is that he moved from small Sub A to big Sub A. Although this was a huge disappointment, it clearly gave him a solid foundation for the rest of his schooling because he always did very well in his studies. He was often first in his class or among the first five. His Matric class, by the way, also was the best of Emil Weder High School in Genadendal for many years.

In 1964 he went to study at the University College of the Western Cape to become a minister. The professors and ministers that formed the selection panel, decided in their wisdom that he was not suitable for that profession. The reason for their decision, was his honesty. When they asked him about his relationship with God, he answered that he was still working on it. They felt that he was not close enough to Him and suggested that he rather become a social worker and in the meantime work on that relationship. In reality he was more ready than many that were accepted solely on the basis of their own assessment of their status. Honesty, which was his hallmark, did not seem to be the best policy in this regard.Despite this disappointment, he became an excellent worker in the vineyard of his Master.

In the VCS (Association of Christian Students) he made a huge contribution by performing a range of tasks on behalf of the organisation and becoming the chairperson of the national executive.During that time, he developed strong bonds with different churches. In his own church, the URC, he did not neglect his duties. Over the years he was part of three parishes in which he was a Sunday School teacher, catechism teacher, member of the church council and the diaconate. Furthermore, he served for five years as the Deputy Chairperson of the Synodal Committee for Diaconal Services.

He was multi-talented and excelled in many spheres of his life. He was artistic and had green fingers and his gardens were always in splendid condition. He often shared plants with others. A yellow Mandela’s Gold Strelitzia, was his most treasured one, therefore, he planted it next to his front door. The reason was twofold: The plant is unusually beautiful, but, like so many others, he also had the highest regard for Pres. Nelson Mandela, and he treasured his photograph with this icon, whose leadership qualities he tried to emulate.

After completing a BA Social Work degree, he worked as a social worker for one year. Thereafter, he joined the Sociology Department of UWC and after four years was appointed as a lecturer. In the meantime, he studied further to complete a B.A. Hons. in Sociology.Jimmy was offered a scholarship to study in the United States of America where he obtained a Master’s degree and a Ph. D. In doing so, he became the first person in his community in Swellendam to become a Doctor of Philosophy. If one takes into consideration the disadvantages he faced during his life, even while studying in America as a father of four children, this achievement can only be regarded as a testimony to his intellect, faith, courage and determination.

After many years of service in the academic world, he accepted the post of Director of Community Development and International Relations at RAU, which later became the University of Johannesburg. During his career he visited many countries and was highly regarded for his competence as a researcher, lecturer, manager and drafter of documents. Furthermore, he served on many academic boards and important community structures and performed duties like being a political commentator on RSG, an Afrikaans radio station.

After having retired, he was approached to manage the internalisation office of the Free State Central University of Technology in Bloemfontein. After a year, he, unfortunately, became ill and was unable to continue with this work. Nevertheless, he persisted in doing valuable work in the community. He, for example, did the 2016 Research Report of the Railton Foundation in Swellendam and researched the history of the well-known Maranatha Male Choir in Cape Town, which he presented as a beautiful photo study.

Jimmy had a strong sense of justice and was very involved in human rights matters at political and moral levels. The forced removal of his family from their home in Murray Street due to the Group Areas Act, contributed to his strong abhorrence of apartheid. This caused him to suffer much humiliation, including being detained without trial for a while. That did not deter him from remaining involved in the Struggle. Among other things, he was part of the Kuils River Reconstruction and Development Forum and for a short while served as the chairperson of the Kuils River branch of the ANC in 1992.He had a keen sense of humour and often used it when addressing audiences, formally or informally. Therefore, he was a good orator and storyteller. People, especially youth, loved to listen to him speaking on a variety of topics. His love of young people was evident in his church and community work. He was often involved in organising youth camps and meetings.He was a good singer and knew the music of his time very well. Furthermore, he was always fashionably dressed, whether it was in bell bottoms, stove pipes or Mandela shirts.

The highlight of his life was marrying Hettie Ferguson. She gave him a base from where he could become everything he wanted to be – and that was a lot. Together they tackled many challenges and reared their children and all those they accepted responsibility for, in the best way possible. They, for example, reared three family children, who successfully followed their chosen careers. As practising Christians, they knew exactly where to find their spiritual, moral and intellectual inspiration. Jimmy died happy because he had his family, including his much-adored grandchildren, around his bed. His daughter Henriette, who was still on her way from her dentistry practice in Zambia, was the only one who could not be there. He had the privilege to say goodbye to each one of them, ask Hettie to kiss him and lastly form the word L. O.V.E. with his lips because he could no longer speak.

The man who could not become his community’s first dominee, became its first Doctor of Philosophy. The one who was held back in Sub A, became an outstanding academic. The person that was often disregarded by intellectual and social snobs, became a role-model to many young people struggling to find a place in the sun. Consequently, the Railton Foundation Swellendam posthumously honoured him with an Unsung Hero Award in 2018.

Jimmy concluded the 2016 Railton Foundation Report with a quote from Rudyard Kipling’s famous poem If, to inspire the staff and management to continue with their important work, at a time when he was facing huge challenges with his health.If you can force your heart and nerve and sinew To serve your turn long after they are gone,And so hold on when there is nothing in you Except the Will which says to them: ‘Hold on!’(… you’ll be a Man, my son!)Jimmy Ellis was indeed a man. May his memory never cease to inspire those who knew him, students and teachers, followers and leaders, young and old to live life to its fullest as he has done.