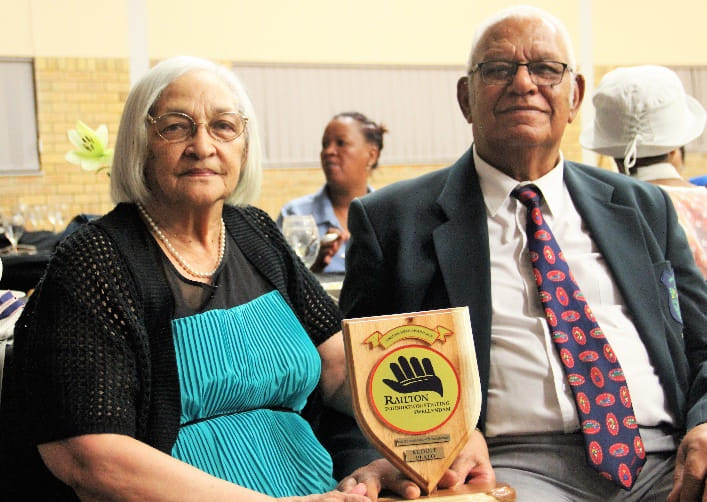 RUDOLPH PLATO: HIGHLY RESPECTED PRINCIPAL, RUGBY PLAYER AND COMMUNITY LEADERRudolph Plato was born in Swellendam on the 9th of August 1941 as the eldest son of Daniël and Jacoba Plato. His father worked as a railway official and they lived in one of their houses next to the railway line. The family consisted of ten children of whom four are still alive.

Their parents gave them the best possible education, despite their meagre income. As a result, all the children became well-qualified professionals (mostly teachers), with one son obtaining a Master’s degree. The youngest, Dan, is the current mayor of Cape Town. Rudolph attended the St Luke’s Anglican School in Somerset Street up to Grade 8 (Standard 6). He attended Emil Weder High School in Genadendal to complete his Matric in 1961. He worked for two years in Worcester before enrolling at Bridgton College of Education in Oudtshoorn to obtain the Primary Teachers’ Certificate at the end of 1965. He later went to Hewat College of Education to do the Primary Higher Teachers’ Certificate. Afterwards he enrolled at Roggebaai College of Education to obtain his Advanced Primary Teacher’ Certificate (Fourth Year) by means of distance education. Therefore, he was well-qualified for all promotion posts at primary school level.

He married Mildred Pekeur on 29 May 1963. They had four children (Wendy, Dion, Gail and Roché) of whom the youngest son, Roché, recently passed away at the age of 40 six years. This was very traumatic to the whole family. Mildred taught at various schools in the district and spent her last teaching years at Swellendam Secondary School as the subject head of English. Rudolph spent all his teaching career as the principal of a farm school. He started at Olivedale Primary School, moved to Proseskop Primary School and concluded his career at Uitvlug Primary School in 1993. Rudolph has fond memories of those years. He is intensely private and hardly speaks about the additional contributions he made to help his learners who were very poor and often needed extra material assistance. Nevertheless, it is clear that he motivated several of them to persevere and become successful citizens.

A short while ago Jeffrey Philander, one of his ex-learners, visited him and told him that he had obtained a Doctorate in Philosophy. Rudolph excelled as a rugby player and a leader in this field. He played this sport at primary school and when he entered high school he really bloomed, and this continued until he stopped playing. In addition, he was often chosen as the captain of his teams. His leadership skills were put to good use in all the teams for which he played, like those of Emil Weder High School, Bridgeton College, Oaks in Swellendam, SWD Union, SWD League and SWD. He participated in the Rhodes Tournament in 1965 in Port Elizabeth as an SWD League player and the one in Johannesburg in 1967 on behalf of South Western Districts. He was so talented that he would certainly have become a Springbok if he had peaked twenty years later. Not only did he do well as a player, but also as an administrator and community leader. In 1995, when Swellendam Rugby Club and Oaks Rugby Club became one, after much negotiation, he was elected to become the first president. He stayed in this position until 2006. In 2016 he was asked to become the honorary president of this club. Until today he is highly respected not only by the rugby community of the town, but also the rest of the Swellendammers.

He received several accolades, like the Unsung Hero Award which the Railton Foundation bestowed on him in 2018. This is not surprising because he has displayed outstanding leadership qualities from a young age. For example, he reacted strongly to bullying. At high school already the weaker and younger learners knew that they could go to Rudolph, if they were bullied. Those responsible for their distress, could expect serious trouble if they were not prepared to mend their ways. Furthermore, he believes that a leader should take the lead and display courage in order that the followers would be inspired to do their best in the interest of everybody involved. His health is currently not good, but this town would want him to regain his strength because his bold and positive influence has for a long time served the inhabitants well. Communal success is highly dependent on a shared vision, often initiated by a committed leader, like Rudolph Plato.